All publicly traded companies hold annual general meetings (AGMs) during which shareholders cast votes on a variety of issues, including shareholder resolutions as well as governance matters like the election of directors and executive compensation packages.

The funds managed by WII hold shares in nearly 5,000 companies, and we have the opportunity to vote at each of their respective AGMs.

In the absence of more direct engagement, proxy voting is an important tool for fiduciaries, as it offers a format to express concerns and encourage sustainable business practices. Generally, we support shareholder resolutions that promote long-term value creation and incorporate environmental, social and governance (ESG) issues into corporate strategy. 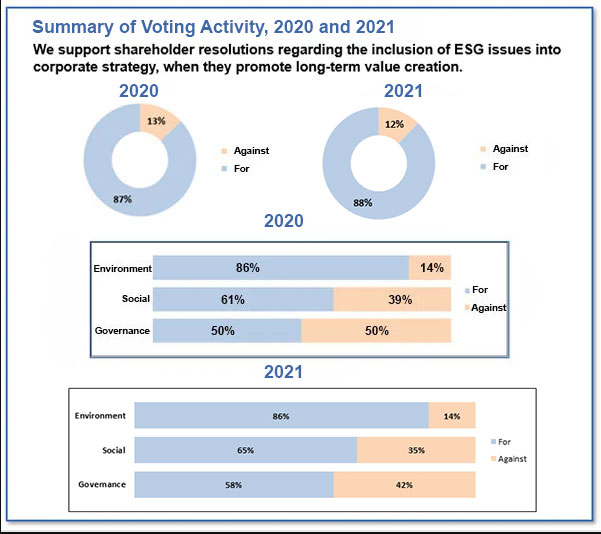 All of our proxy votes are cast in accordance with our Proxy Voting Guidelines, which are annually updated and approved by our Board of Directors. The values of The United Methodist Church (UMC), as well as our understanding of the responsibilities of prudent fiduciaries, help shape these guidelines. They are organized in four main sections:

We engage Institutional Shareholder Services (ISS), a leading proxy analysis firm, and other data sources to help us execute our policy. Resources like those offered by ISS help us review and understand resolutions and proposals, and although our staff votes the ballots of many large holdings on a case-by-case basis, ISS also assists in executing certain votes.

In recent years, Wespath’s proxy voting activity has extended throughout the ESG spectrum and touched on several key sustainability topics.

Board of Director's Failure to Address Climate Risks

After Exxon failed to address climate risks and position the company for a transition to a low carbon economy, Engine No. 1, a small hedge fund focused on creating value through positive impact, elected three of four directors from their dissident slate to Exxon’s board of directors. Large institutional investors Blackrock, Vanguard and State Street as well as leading pension funds CalSTRS, CalPERS and New York State Common supported a varying number of directors from Engine No. 1’s director slate. Wespath supported two of the three dissident nominees elected to Exxon’s board while also supporting directors that explore opportunities to mitigate and/or to adapt to climate change risks.

Banking giant JPMorgan Chase & Co. (JPM) has faced lawsuits related to discriminatory lending practices against communities of color, closed numerous branches in majority black communities, and has been accused of discriminatory practices against its clients and employees of color. JPM made headlines in 2020 for its $30 billion commitment to combat racial inequalities. In 2021,nearly 40% of shareholders urged the board of directors to go one step further, asking them to perform a racial equity audit analyzing JPM’s impacts on Black, Indigenous, and people of color (BIPOC) communities, with input from civil rights organizations, employees, and customers. Wespath supported this resolution as it aligns with our Sustainable Economy Framework.

Percentage of total votes cast in favor of the resolution: 39.80%

Wespath believes that a company should disclose its lobbying-related expenditures, trade association payments, and the extent to which its board oversees these activities. These disclosures help assure investors that the work of its lobbyists and trade associations align with public statements made by the company on various issues of interest to investors. Consistent with this policy, Wespath voted in favor of a recent proposal seeking a lobbying report from Netflix.

Percentage of total votes cast in favor of the resolution: 80.66%