Can Negative Sentiment Be a Positive Market Indicator?

Investors have a lot on their minds—a tragic war in Ukraine, the highest inflation in forty years, rapidly rising interest rates, slowing corporate earnings growth, a potential recession on the horizon, and the unusual combination of falling stock and bond prices.

As of June 17, 2022, the S&P 500 stock index was down 22% year-to-date, and the Bloomberg Aggregate bond index was down 11%. Combined with consumer price inflation of 8.6% versus a year ago, the economic impact is significant.

The University of Michigan measures consumers’ level of optimism monthly—as it relates to their personal finances and the economy more broadly—with the Consumer Sentiment Index. Not surprisingly, as shown below, consumers are feeling pretty gloomy. 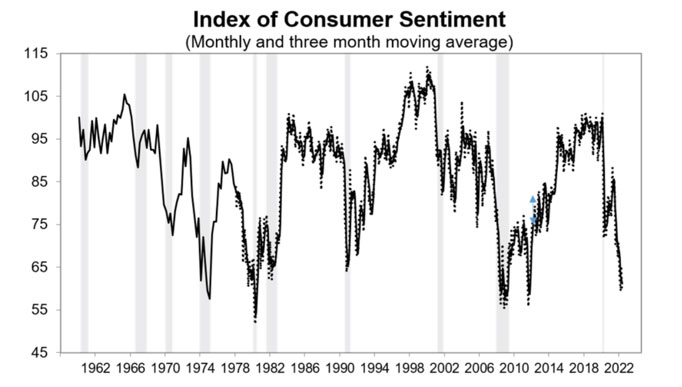 This gloomy sentiment is also reflected in the American Association of Individual Investors (AAII)’s stock market survey. In this case, investor sentiment is 58% bearish (negative) and only 19% bullish (positive), as shown below, which is far more pessimistic than historical averages.

I probably don’t need to tell you that people are generally feeling concerned—of course they are! However, it’s precisely these worries that get reflected in securities prices. Howard Marks, the co-founder and co-chairman of Wespath’s long-time asset manager Oaktree Capital Management, has described the mood of investors as an emotional pendulum that swings between the extremes of euphoria and depression. When the economy is expanding, corporate profits are rising and stock prices are increasing, investor psychology swings towards euphoria and causes emotional buyers to bid up stock prices beyond an equilibrium level. When the economy and stock prices turn negative, investors observe declining stock prices and the psychological pendulum swings the other way. Pessimistic investors obsess over the negatives and sell stocks, which drives prices further downward. The selling due to negative sentiment sometimes causes stock prices to overshoot to the downside, creating the potential for superior price appreciation from that point forward. Eventually, the dark clouds will dissipate, the economy and corporate earnings will again strengthen, stock prices will begin to rise and the pendulum will start to swing towards euphoria again. History has shown that future investment performance can actually turn out quite well from a gloomy starting point for investors who remain disciplined and avoid acting based on their emotions. As Marks says, “emotion is the greatest enemy of superior investing.”

Take a look at that Consumer Sentiment Index chart again (below). This time J.P. Morgan notes the subsequent 12-month S&P 500 Index returns next to the consumer sentiment turning points. For example, in August 2011, while consumers were experiencing substantially lower-than average sentiment, stocks experienced a 15% rebound over the next year. Historically, from some of the darkest points for consumer sentiment come some of the strongest stock market returns. 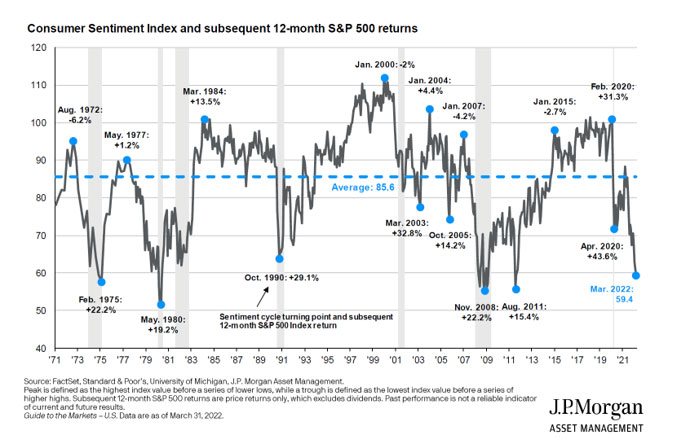 And look at what the AAII states right on its website regarding its investor sentiment survey: 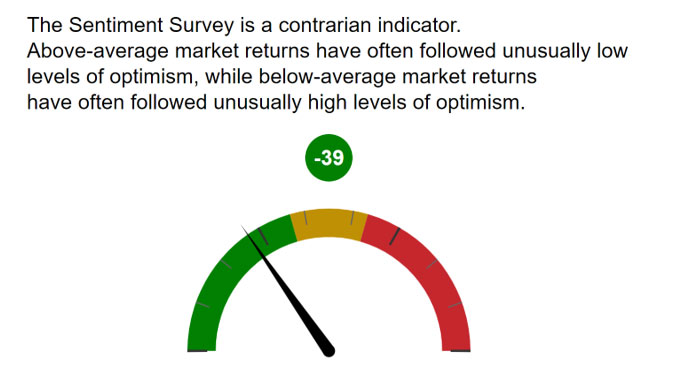 You probably know that at Wespath we do not try to forecast the economy, or the next market moves. We can’t say with any certainty where investors’ emotional pendulum currently lies within its cycle, and we can’t predict when the economy or corporate earnings will reach peaks or troughs. While we have no way of knowing what the future holds, we can look at what history has shown, which is that sometimes recoveries from the most worrying market performance periods provide rewarding investment performance. As always, Wespath continues to diligently monitor the investment implications of global economic news and market developments, while adhering to our consistent, long-term and disciplined investment strategy.